Hungry Opera Machine’s Original Opera, “Flour, Salt and Moonbeams” Reviewed in the Oregonian: (you can also go to their site and read it there). 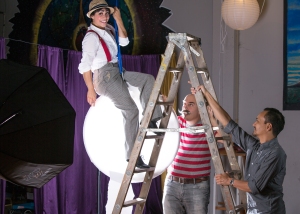 I have to confess that when I read the title “Flour, Salt, and Moonbeams: A Gypsy Jazz Opera,” I couldn’t help but roll my eyes at the prospect of a self-consciously quirky Portland cultural product, a twee hipster mashup that even “Portlandia” would be powerless to parody. Thankfully, I was mistaken. Less dark and convoluted than his “Queen of Knives,” co-produced by Vagabond Opera and Wanderlust Circus five years ago, Eric Stern’s latest work is, yes, restaurant-themed in a sense, but what really drives it is Stern’s goal — openly expressed in his prefatory remarks — to get to “the bare-bones essence of opera,” the simple act of storytelling in music and theater. He achieves it not by a modernist approach of starting from a clean slate, but rather by drawing from a few openly acknowledged inspirations: the Hot Club jazz of Django Reinhardt and Stéphane Grappelli, Commedia Dell’Arte, early screwball comedy and verismo opera. “Flour, Salt, and Moonbeams” blends them well and smartly with a let’s-put-on-a-show ingenuous enthusiasm. Highlights: The plot involves a greasy spoon diner, a gangster with a craving for corned beef hash, a newly-hired tramp of a cook who makes only tortillas and–tiniest of spoiler alerts–a redemption. The ensemble is as lean as the story, with four in the cast (plus one playing a cook who gets fired early on) and four in the band–Stern on piano, Mirabai Peart on violin, Drew Nelson on bass and Paul Evans on sax and drums. It’s a tight, swift show. Most valuable player: As in any chamber piece, no one was upstaged, but Stern and his Hungry Opera Machine collaborator Annie Rosen (who also played the Tramp and directed) deserve special mention for their vision and heart. Moment of the night: It’s a toss-up between the profanity-laced aria by sweet-voiced soprano Dru Rutledge as the potty-mouthed Waitress and the scene in which the manager (Noah Mickens) reveals cracks in his cynical armor and the gangster (Ian Ramirez) disrobes out of charity. Don’t worry, both are G-rated, with percussion covering the cussing in the former, and the underwear in the latter being nothing that would raise an eyebrow on Alberta Street on a sunny spring afternoon. Repeats: 8 p.m. today, Alberta Rose Theatre, 3000 N.E. Alberta St. Tickets: http://www.albertarosetheatre.com –James McQuillen

Read what David Stabler of the Oregonian had to say about HOM’s opera Flour, Salt, and Moonbeams. You can also read it on the Oregonian’s Site: 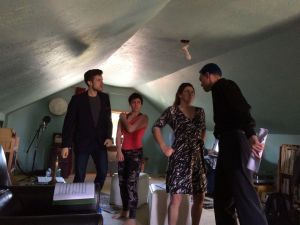 A Mafioso guy walks into a diner.

Stop me if you’ve heard this one. The Mafioso guy wants corned-beef hash. The cook only makes tortillas. Ladies, and gentlemen, we have an opera. A Gypsy jazz opera, courtesy of Eric Stern – he of Vagabond Opera, shaved head and vaudevillian beard. And radical ideas about opera. Stern has a new opera, a hybrid of high classical, low comedy, fluid jazz and boho sensibility. “Flour, Salt and Moonbeams” plays at Alberta Rose, March 27 and 28. He also has a brand-new opera company. It’s called Hungry Opera Machine and it springs from the same mind that created Vagabond, but the two companies are different. Vagabond is a band that tours the country with cabaret, jazz, klezmer, bohemian and Balkan music. Hungry Opera stays home and brings opera to the people, says the man who crossed the country in his 20s, singing and playing accordion in the streets. And who paid for his first Portland apartment by busking outside Pastaworks on Hawthorne Boulevard in 1992. Stern loves opera, he says, having sung roles in “La Boheme” and such in Delaware and Pennsylvania. He just wants to make it more accessible. “I want this to be more radical, weave opera into the community more than it is,” he says. That means operas in English, with a broader approach to music that includes jazz, folk and contemporary, and a dramatic style that goes back to Commedia Dell’Art. Portland is a place to do that, he says. “The musical air is a little freer to breathe here.” Which is good, because Stern is one of those guys who can do anything. Write, compose, arrange, sing, act, play instruments you’ve never heard of. Consider the origin of “Flour, Salt and Moonbeams,” dubbed “A Gypsy Jazz Opera.” Last summer, Stern invited a bunch of people into his backyard to preview the show. About 100 folks packed into his north Portland yard, sitting on tarps, blankets, straw and cushions. He began with a singalong of “A Roving,” the jaunty sea chanty. “We all have a voice,” he says. “They weren’t afraid of their own voices.” In November, the new opera came inside for a preview in Mississippi Pizza Pub, and now it’s ready for prime time, with four singers and four instrumentalists who cross stylistic boundaries themselves. The plot is simple. A Charlie Chaplin-type cook (Annie Rosen, Dell’Arte International School of Physical Theater) has a limited repertoire of dishes: tortillas only. When the Mafioso (Ian Ramirez, Portland Opera resident artist) with a broken heart bites into one, he’s in rapture. Hilarity ensues with a potty-mouthed waitress (soprano Dru Rutledge, Portland Opera) and a tightwad restaurant manager (Noah Mickens, Ringmaster for Portland’s Wanderlust Circus). A silent film breaks out, followed by a fullblown Puccini-like aria. Or maybe it’s the other way around.

During a recent rehearsal in Stern’s “garret,” the second-floor of his house, singers moved through their scenes while Stern accompanied them on an electronic keyboard. He wrote both the music and text for the show.

The music moves fluidly from 20th-century classical inspiration – Puccini, Gian Carlo Menotti, Francis Poulenc, Claude Debussy – to jazz (Django Reinhardt, the great jazz guitarist) and Eastern Europe. The four instrumentalists are Paul Evans (saxophone/percussion), Mirabai Peart (violin),  Drew Nelson (bass) and Stern (piano). The opera’s larger message is about giving something away, Stern says. “The Mafioso is trying to control everything, but in the end, it’s not making him happy. You can’t control a lot in life, but you can control what you give. Cooking is a way to give love.” He and the cook/tramp switch clothes and jobs. It’s no accident the opera centers on food. As the company name implies, Stern loves to cook. Last Father’s Day, his wife, Jill, and son, Jascha, gave him a tortilla press. He often feeds the cast during rehearsals. Tonight would be chili. Stern’s startup company is small by opera house standards, but it suits him – and his budget, he says. Income from ticket sales will pay the musicians and production costs. He hasn’t applied for non-profit status, and he may never, he says, which means he can’t attract money from public sources or foundations. “I wrestle with that question,” he says. “Can we make it on our own? I used to think ‘marketing’ was a four-letter word.” He knows better, now, but writing grants and asking for donations – he’s not there, yet, he says. Like other startups such as Opera Theater Oregon, Stern is showing Portland that opera doesn’t have to be “this old-fashioned, elite thing in a foreign language,” he says. “It can be relevant, not expensive and integrate the community. Singalongs. Have a chorus of community singers. You don’t need a full orchestra. You don’t need to dress up. People respond to voice and to story. Opera should be for everybody.” “Flour, Salt and Moonbeams,” 8 p.m. March 27, 28 Alberta Rose Theatre, 3000 N. Alberta St. $20 advance; $25 at the door albertarosetheatre.com hungryoperamachine.com — David Stabler dstabler@oregonian.com 503-221-8217 @davidstabler

Like Loading...
Portland's own HUNGRY OPERA MACHINE has LAUNCHED. Here's our exciting mission: To produce contemporary opera and theater in English casting primarily from the talent pool of the Portland Oregon community and the Northwest. To explore the intersection of story and song, Opera and Commedia Dell'Arte. To extend the operatic tradition by choosing operas that not only conform to the classical standard but also ones that may include other forms of music such as jazz and music from everywhere.